10Trinity Square is a design build project which involves the refurbishment, conservation and extension of a Grade II listed building in the City of London into a 140 bed 5-star hotel, with 41 serviced luxury apartments. Construction consists of structural refurbishment, traditional new-build and modular new-build.

Works commenced in 2012 and are currently ongoing.  The project is within a confined city centre site. There are 4 additional floors being added on.  These are to be supported on a steel transfer structure at the existing fourth floor.  The critical criterion for the steel design at transfer level is deflection as this affects the entire structure over.  A normal steel transfer solution would have resulted in exceptionally heavy steel beams at that level.

BMCE acted as structural civil and structural consultant to the design build contractor. A technical paper presented on the structural design of the scheme by BMCE project engineers won The IStruct E branch prize and was awarded the Sir Arnold Waters medal by IStructE

The project was a complex one with many different components including new basement floor to the courtyard and significant courtyard extention as well as the vertical extention of the original building. A bespoke method of pre-loading the steel beams to pre-deflect the beams by the equivalent deflection that would have been caused by the dead loads of the super structure over thus reducing the on-going deflections to those induced by live loads only was devised.  This had the effect of reducing the steel tonnage in that part of the  structure by approximately 35% . 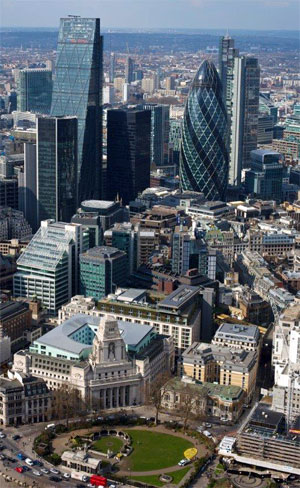